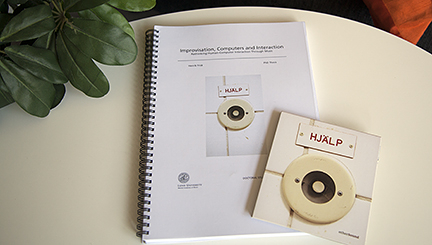 Improvisation is at the heart of all the sub-projects included in this thesis, also, in fact, in those that are not immediately related to music but more geared towards computation. Trusting the self-organizing aspect of musical improvisation, and allowing it to diffuse into other areas of my practice, constitutes the pivotal change that has radically influenced my artistic practice. Furthermore, is the work-in-movement (re-)introduced as a work kind that encompasses radically open works. The work-in-movement, presented and exemplified by a piece for guitar and computer, requires different modes of representation as the traditional musical score is too restrictive and is not able to communicate that which is the most central aspect: the collaboration, negotiation and interaction. The Integra framework and the relational database model with its corresponding XML representation is proposed as a means to produce annotated scores that carry past performances and version with it. The common nominator, the prerequisite, for interaction-as-difference and a improvisatory and self-organizing attitude towards musical practice it the notion of giving up of the Self. Only if the Self is able and willing to accept the loss the priority of interpretation (as for the composer) or the faithfulness to ideology or idiomatics (performer). Only is one is willing to forget is interaction-as-difference made possible.

Among the artistic works that have been produced as part of this inquiry are some experimental tools in the form of computer software to support the proposed concepts of interactivity. These, along with the more traditional musical work make up both the object and the method in this PhD project. These sub-projects contained within the frame of the thesis, some (most) of which are still works-in-progress, are used to make inquiries into the larger question of the significance of interaction in the context of artistic practice involving computers.