STUDIES IN MUSIC AND MUSIC EDUCATION NO 1 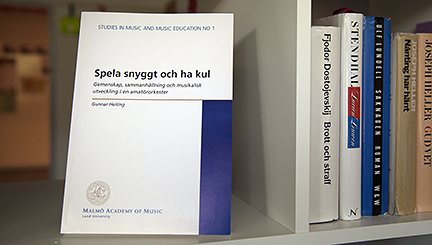 ABSTRACT
In a Swedish brass band a program for change was pursued which aimed to improve the artistic level of playing of the ensemble without replacing less competent members. At the time for the study the band comprised 34 members, four of whom were female. The research question was: How does community and group coherence interact with the goal to improve the musical standard in an amateur brass band?
The music-making of the band is approached from two perspectives, one of social psychology and education, and the other of aesthetics. The band is seen as an organization, where the activities and the roles of the musicians as well as the relations between them are described. The activities are either oriented towards the musical results, the social relations, or both. The unit of analysis is the social practice. Attention is focussed on what happens in the daily work during rehearsals and concerts.
The musical standard of the band is discussed according to two different perspectives on aesthetics, one traditional, based on technical criteria of quality, the other also concerned with musical expression and extra-musical factors such as the composition of the program and on-stage deportment, the so called “passepartout of music”. Data-collection include participant observations, interviews and audio- and videotapes of rehearsals and performances during a period of one and a half years with a follow-up about two years later.
Major conclusions include: The band can be described as a social community with a balanced group coherence, which is neither too strong nor too weak. The aesthetical code of the band is characterized by a striving for artistic perfection which is restricted by time, by the leadership-style and the competence of the conductor, and by the goal-acceptance of the individuals who comprise the band. With a simultaneous emphasis on the “passepartout of music”, shortcomings in artistic perfection can be compensated by a desire to work for and cooperate with the audience. Thus the likelihood increases that there will be goal-acceptance and goal-fulfillment among the individuals who comprise the band, when the goal is: Play well and have fun.