Roots of The Gambia 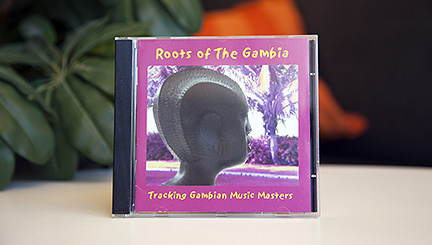 FÖRORD
All the recordnings on this CD are made live in the homes of great traditional masters of Gambian music. The door operer, guide and translator is jali Alagi Mbye, himself a great master of kora, the 21-stringed African harp. The idea to make a documentation of old masters has grown from many years of contacts between the Malmö Academy of Music and Alagi Mbye. A first album was made in 1994, as one of many ingredients in the mulicultural projects at the Malmö Academy of Music.

This album has more than one purpose. The aim of Alagi Mbye was to collect material to be used for the education of the children in Gambia. He is building "Maali´s Music School"; the first music school in Gambia based on traditional music and open to all children.

The aim of the Malmö Academy of Music was to make research on the methods for teaching and learning in oral traditions. During one unforgettable week in Februari 1998 we crossed Gambia in search of musicians and story tellers. From Njoba Kunda village to Basse Santa Su and back to Serrekunda we were completely "filled up" with music and stories. After many days of translating the interviews and songs from Mandinka and Fula to "Gambian English", Alagi Mbye concluded that he wanted to continue this work, "... to know more about ourselves in the future...".

This project has been sponsored by the Malmö Academy of Music, Lund University, Sweden.