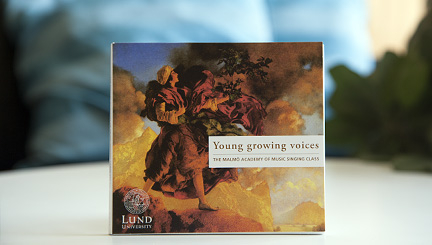 THE EDUCATION
This album has been influenced by events and people connected to the music conservatory founded in Malmö in 1907, and today´s classical singing programme at the Malmö Academy of Music, which is a part of Lund University.

The Academy´s Performance Programme specializing in vocal studies today covers a broad selection of eras and languages within the western tradition of music, ranging from early music to modern composition.

Many professional classical singers have earned their degrees at the Malmö Academy of Music. During their training at the Academy, students sing songs, in ensembles, opera and oratorio arias, and chamber music. New to the vocals programme is that students can also take classes in opera improvisation, where students improvise their own music, lyrics and dramaturgy, creating unique opera scenes in the moment. During performances, improvisation occurs in interaction with audiences.

The classical singing class at the Malmö Academy performs frequent concerts, which give students excellent opportunities to use and explore the skills they have acquired on the programme. We believe these experiences are an important part of strengthening our students’ personal development.

The following singers from the Malmö Academy of Music performs on this recording: